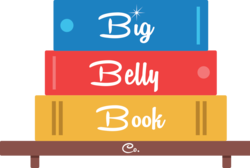 6 Skills that Prove My Daughter has Super Powers

Last night, I took an inventory of the things I know about my infant child. She’s now five months old and has learned a new trick. She can roll over. One way though. She can flip from her back to her stomach, but not back again. In fact, when she rolls over, then can’t roll back again, she looks at me like it’s somehow my fault. I refuse to be the victim here, baby.

In that moment, I realized I’ve underestimated my daughter’s abilities. Sure, it’s true that she isn’t mobile, and no, she can’t talk. But, she can manipulate her environment and do things in a way I’ve never seen done by adult human beings. I’m convinced that I’m a major player in my daughter’s superhero origin story. Here are her developing superpowers.

Without fail, if the baby is in a room, all organic matter in the area orbits her like planets in the solar system. Whether we’re in the grocery store or our living room, she will become the center of attention. All eyes, hands and voices are directed at her. The baby doesn’t even work for it. She’s not telling jokes or juggling chainsaws. She’s not even wearing designer clothes. Regardless, people gawk at her like she’s the first baby there ever was. 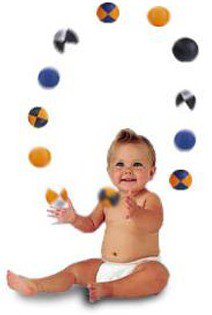 A juggling baby could freeze time.

I’m acting like it happens without my permission, but that’s not true. The other day, I was walking down the street with my daughter in a carrier around my chest. This couple passed us going the opposite direction and didn’t so much as even glance at my baby. That was strange. I looked at my daughter’s face in an attempt to figure out why her magnetism skills might have worn off. Was her hat not straight? Had she gone cross-eyed? Nothing was amiss. That couple must have been blind.

Workplaces, especially manufacturing facilities, place priority on efficiency. To increase profits, assembly lines are tweaked, walking distances are shortened and waste is reduced. Employees get this mentality driven into their heads from day one. There’s even a process called Six Sigma that awards employees with colored karate belts for mastering new levels of efficiency. I met a Black Belt Six Sigma once; he was so efficient, he sneezed and rectified his budget. 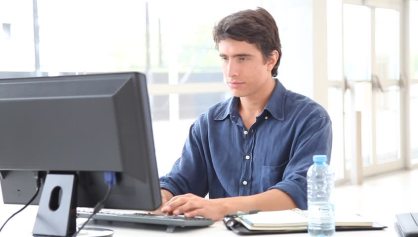 If you think that’s impressive, you should see what he does when he farts.

All this effort develops new, inventive ways to increase production, but really, all these companies need to do is follow one simple rule: don’t let babies visit the office. When my wife brings my daughter to visit me at the office, the entire floor stops working. One of her giggles reverberates down the halls, attracting the attention of even the most grizzled of employees. Even the most frowny-faced, mustachioed pencil pusher in the back corner is no match for the allure of a baby in the office. If Six Sigmas are building an army of black-belt efficiency workers, their greatest enemies would be an army of babies. 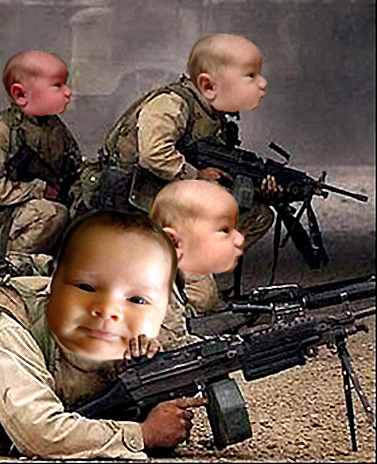 I Googled “baby army” and was not disappointed.

My daughter has the cutest face I’ve ever seen. It’s so cute, it once defrosted my windshield. It really is the whole package. She has this cute patch of hair that bounces with curls. Her mouth has a permanent smile, and she has the best button nose. Her eyes are the real magic though. I could stare into them for days. I never understood pure joy until she looked up at me with her innocent and bright eyes.

Then I saw her through the baby monitor.

Our video baby monitor has night vision. For those who don’t know, the infrared light in a night vision camera goes a bit haywire when it enters the pupil and reflects back from the retina. In my daughter’s case, when you look at her through the monitor at night, those adorable eyes morph into black death caverns with pinlights that gaze into your soul. I got a glimpse in the middle of the night and was immediately thankful we have a waterproof mattress cover. 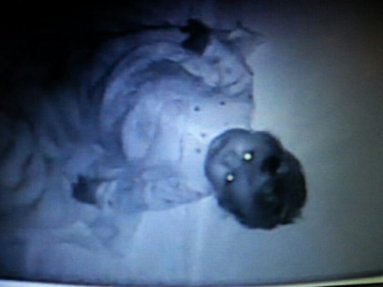 My daughter had a strong grip from birth. After some research, it turns out that’s nothing special. All babies are able to activate what’s called the palmar grasp reflex, which allows them to hold their entire body weight. Don’t look that up unless you want to see some disturbing old photos from a pre-ethics research study in which they dangled babies. 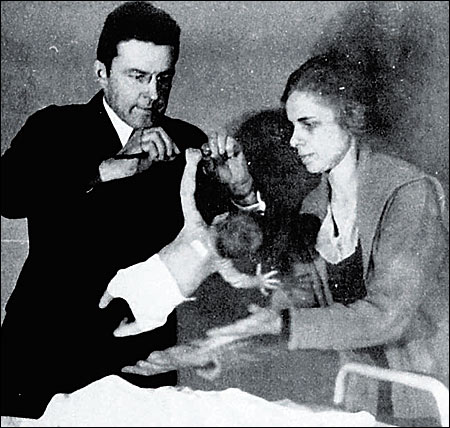 I really did try to describe that so it wouldn’t be so enticing, but that’s impossible. Here you go.

Anyway, the involuntary palmar grasp wears off when babies start to develop fine motor skills. Not with my daughter though. If she holds anyone’s finger, they are completely unable to get away. My dad is perhaps the most susceptible to this vice grip. This one time, she held him so long, he was late for a meeting. I don’t know if it’s because she’s strong or if it’s because she reduces her victim’s will to leave, but regardless, she has a superhuman ability to incapacitate adults 30 times her size.

There is no escape once captured. She’d make a good bounty hunter.

My daughter started teething at three-and-a-half months, sprouting her first two right when she hit the four-month mark. Since then, her mouth has been an open faucet, leaking a steady stream of drool everywhere she goes. Our house looks like it was hit by the Wet Bandits.

All the greats do have a calling card…

If I can collect my daughter’s excess saliva, maybe we can end the drought in California. Water really is free – we just have to figure out how to connect her mouth to a rain barrel.

Before my daughter was born, my wife and I gave each other a pep talk. We weren’t going to be helicopter parents. We read the articles about how the current generation of kids is just the worst, and it’s because their parents messed them up by giving too much attention and placing too many safeguards. We weren’t going to do that. If our daughter fell over, that was a great way to teach her balance. If she didn’t get picked for the soccer team, the disappointment would be a great way to learn coping mechanisms. In the months before my daughter was born, we’d chant this mantra to each other over and over again. “We won’t be helicopter parents. We won’t. We won’t.”

I’m glad to say, we are definitely not helicopter parents. Instead, my daughter has developed a protective force field. Really! If something falls and is about to hit her, it miraculously bounces away inches before contact. If she almost rolls into the crevice in the couch, she’ll miraculously bounce back into a safe position. If she almost pushes the arm of her doll too far in her mouth, it miraculously shoots out before it can gag her. She really does have a protective force field! It’s definitely not us swooping in to save her every five seconds.